Hello I'm WolfmanX9 and I am in love with Warframe. I mean, who does not want to play as a space ninja with awesome ability?

"Ask Excalibur, Nekros, Valkyr and Nyx" forum thread (Archived. It was nice while it lasted)

Link to the first page

RP characters (Now with unique items for each OC, if they have one that is and if not, will be added depending on RP threads or own idea)
(New: Grineer OC: Thraks Draga):

Excalibur
Name: Arthas (A reference to king Arthur, who wielded the sword Excalibur and pulled it out from the stone or to put it simply: "the one who pulled the sword in the stone")
Age: Adult
Voice: Samurai Jack from Samurai Jack (I would have never have guessed that *sarcasm*)
Hair: short, white spiky anime, Azura wraths styled (google is your friend)
Theme song: Lost Horizon - The one
Unique items in inventory:
Shard of Twilight - "a dark coloured shard with engraved runes , this shard allows Arthas to change his appearance to the kubrow version of himself by channeling his energy. He can do the same to turn back into his normal form (Earned from the RP thread "Tenno HQ")"
RP color: Cyan or Aqua as I like to refer it as.
Appearance:
http://i.imgur.com/ViLOzBH.jpg

* He is nice towards other Tennos
* Willing to help if someone is in danger(even if it means risking his own life)
* Can also be a great leader if the opportunity presents it (he will however not steal it, if someone else is the leader).
* Will fight fair and square, if possible.
* Prefer to use melee more than guns

Mystery corpus device - "A potable corpus device that Fang "borrowed" from a corpus ship, this device can almost do anything that Fang know of. Not every functions has been discovered yet by him"

Shard of Twilight - "Like the one Arthas have, this shard of twilight allow Fang to transform into a kubrow version of himself. In his kubrow form, he is huge, but slim and have colors that reminds about his warframe's colors ((Also earned from Tenno HQ))"


* Can be on the creepy side
* He usually likes to work by himself (Even though his "skills" is more suited to support others in battle)
* Can from time to time, switch to a second personality (from "regular" Nekros, to "sick-evil-scary" Nekros)
* He also has a hobby of painting skulls, from the enemies that he slays
* Has a doctor licence, since he is the one who is dealing with the living and the dead. His doctor skills is not like every ones though, unique in his own way

Portable fireplace - "a portable fireplace made by the their dojo's own Vauban named Jack, this fireplace is design to be the real deal without the danger of burning or get caught on fire by the users. As an added bonus, the portable fireplace can be configured to be in other colours, including shifting in the colours of the rainbow. The default color is the normal flame color"

Portable kubrow bathtub - "another of Vauban Jack's inventions, this bathtub can be folded to a briefcase and be carried around with ease. This bathtub also comes with its own internal water tank, in case of limited access to water or other situation. The internal tank can be filled and emptied by pumping in/out water. This bathtub fit kubrows of any sizes, from to small to large"


* Has almost managed to control her anger
* Works at a Kubrow Kennel
* Kind to Tennos, mean to the enemies
* Do not like tennos who stare at her behind. Those who do that will get punched or worse if caught by her

Nyx
Name: Luna (Fitting name for the god of the night, daughter of chaos, from the greek mythology)
Age: Adult
Voice: Orihime from Eng dub Bleach (I know, soo diverse in voice actors, but it may change. For now this voice have to do)
Hair: Very-Long, dark emerald green. The hair reaches to her hips and she also got a bang that covers her right eye
Theme song: Skillet - whispers in the dark (still wip, so I use this for now)
Unique items in inventory:

Remote Cephalon drive: "a small hard drive that stores a synced up to date copy of her ship cephalon Lucy, ready to be plugged into almost any database or other compatible machinery. It was created by their dojo's engineer Jack in case of needing someone to talk to or taking care of the high tech stuff. It can be easily be removed without having to shut down the cephalon copy and not risking of damaging the cephalon while it's still within the plugged in system" - (mentioned)


*Friendly as Arthas, but she can also manipulate other for her own or others needs (you don't say Captain Obvious)
*Likes to hang around with her friends and other female tennos
*She can be a little shy with new tennos, who she hasn't met yet. Unless she has a close friend to aid her
* Likes to paint on her spare time, technique doesn't matter, she can do pretty much every type of artstyle pretty well. She prefer to draw with pen or using a paintbrush as her favorite type of creating art.

Ember prime
Name: Erza (A big fan of Fairy tale, so unlike the other names; this one isn't based off a goddess)
Age: Adult
Voice: Erza scarlet (eng dub) from Fairy tale (It didn't sound that bad when I searched and listen to it, so why not. Watching the show in original japanese dub btw)
Hair: Scarlet-Red, waist long, simple (and yes, I think about the hairstyle from Erza from Fairy tail :P)
Theme song: Dragonforce - Through fire and flames
Unique items in inventory: (none so far)
RP color: Blue
Appearance:
http://i.imgur.com/SinoHxO.jpg

* Likes to party when she gets the chance (aka somewhat of a party animal)
* Beside loving the idea of liting the enemies on fire, she is an expert on everything related to fire, that include to put it out (even without the help of her Warframe)
* Can be serious and somewhat stubborn when she is determined to do something she is really into or really want to complete it (like competing for example)
* She likes kavats more than kubrows. Kubrows are ok by her

Appearance: Sporting a slightly battle worn elite lancer armor, he doesn’t look that different from any other grineer units of his kind, with the main difference being that he always seem to be wearing a “homemade” forest camo painted poncho with a hood that he can turn into a scarf with a hood if he so desire (which he usually does before combat). Said poncho was made from scraps that he managed to salvage from abandoned buildings that used to be populated before the war of the orokin era or somewhat recent grineer invasion. Like most grineer, he lack any facial hair, however, he’s one of the few with actual hair on his head and said hair is black, medium long  (which some grineer think he look kinda odd or girlish in, but he doesn’t care). He also have a standard issue grineer mask that he usually wear out in the field, only taken it off when he think it’s ok.

Bio: Unlike most grineer lancers, Thraks was more clever than what the commanders expected. It didn’t take long before he was promoted to an elite lancer and then not so long time after that, an elite lancer officer. The word spread about his great strength in combat that General Sargas Ruk himself got interested in him. Several weeks after Sargas Ruk had heard of him, Thraks got promoted to join the ranks of General Sargas Ruk elite army. Most grineer could only have dreamt of getting such honor to serve in the army lead by the general, but not Thraks, because he had started to develop something that would be frown upon the grineer order: a sense of right and wrong. As he learn more about the grineer and their ultimate goal of galaxy wide domination, he started to wonder if the things he had done in the past was “right” after all. However, he knew if he was caught for thinking like a corpus coward or a betrayer like the tenno, he could be executed for treason or worse; get sent to Rathuum to fight for his fate. He kept his newly found moral to himself for the time being for his own safety. He had heard rumors about a rebellious grineer group known as the Steel meridians that fought for the freedom for those who seeked it, this he should find out more in the future once he had more free time on hand.

Several months later after his newfound moral, he had overheard from a fellow grineer in one of their many barracks that there was said to be a derelict place called “Fortuna et Ops”, a place where you could find fortune and glory, other said it cursed anyone who dared to enter its domain and never escape out there alive. This greatly piqued his interested, maybe this could be a way for him to get what he wanted: a way to escape the order of the grineer by assumed to be dead. With questionable, but still granted permission from General Sargas Ruk, he got permission to seek out this foolish derelict place at the expense of his own safety.

Equipment: Wears a slightly battle worn elite lancer armor with a forest camo painter poncho with hood (can be turned into a scarf with hood). His weapon of choice is Buzlok (the weapon of choice for dealing with high priority targets), Kraken (the weapon he uses when he faces multiple enemies) and finally, the Jat Kusar (To surprise unsuspected enemies and for its versatile uses in close quarter combat). He also have a bag of ranton in case of need for something to eat (while they have been trained to survive without food for a very long time, it never hurts to have it. The ration is canned food that taste somewhat bland, but at least it contains vitamin and minerals to keep him “healthy”). Finally, he carries around a first aid kit in case of needing to treat his or someone’s else wounds (he has taken a couple medical lessons from a skilled doctor)

Companion: Normally he doesn’t bring his companion for the risk of being destroyed by the tenno, however, since his plan is to “fake his death”, he had decided to bring his faithful companion with him. It’s a carabus sentinel that is colored mostly dark blue and gray. His carabus is mostly there to keep him company and to provide him information when he needs it. In other word; it doesn’t have any weapons installed. However, if his master where to get in trouble, the companion can provide him with a temporary shield that could last a couple hits before breaking

* Is about the size of a hand

* Even though he look scary, he is pretty kind to everyone he meet.

* Used to work in a restaurant, but because of unfortunate event of bankruptcy, the place had to close down. The restaurant also severed as his home when he was there.

* Currently seeking for a new place to live in.

* Arthas as a huge, bulky kubrow.

* Can be a bit more playful in this form.


Cephalon Lucy
* She is Luna's very own ship Cephalon
* Have a similar personality as her operator, although not as shy as the operator can be
* Her "main display" colour is Emerald Green with a yellow tinted glow inside of her cephalon body

Jack (Vauban)
* Talk in an irish accent (Not the best at writing in that accent, but I try)
* The dojo's Engineer
* Likes to invent stuff that are either practical or just for fun (mostly practical things)
* 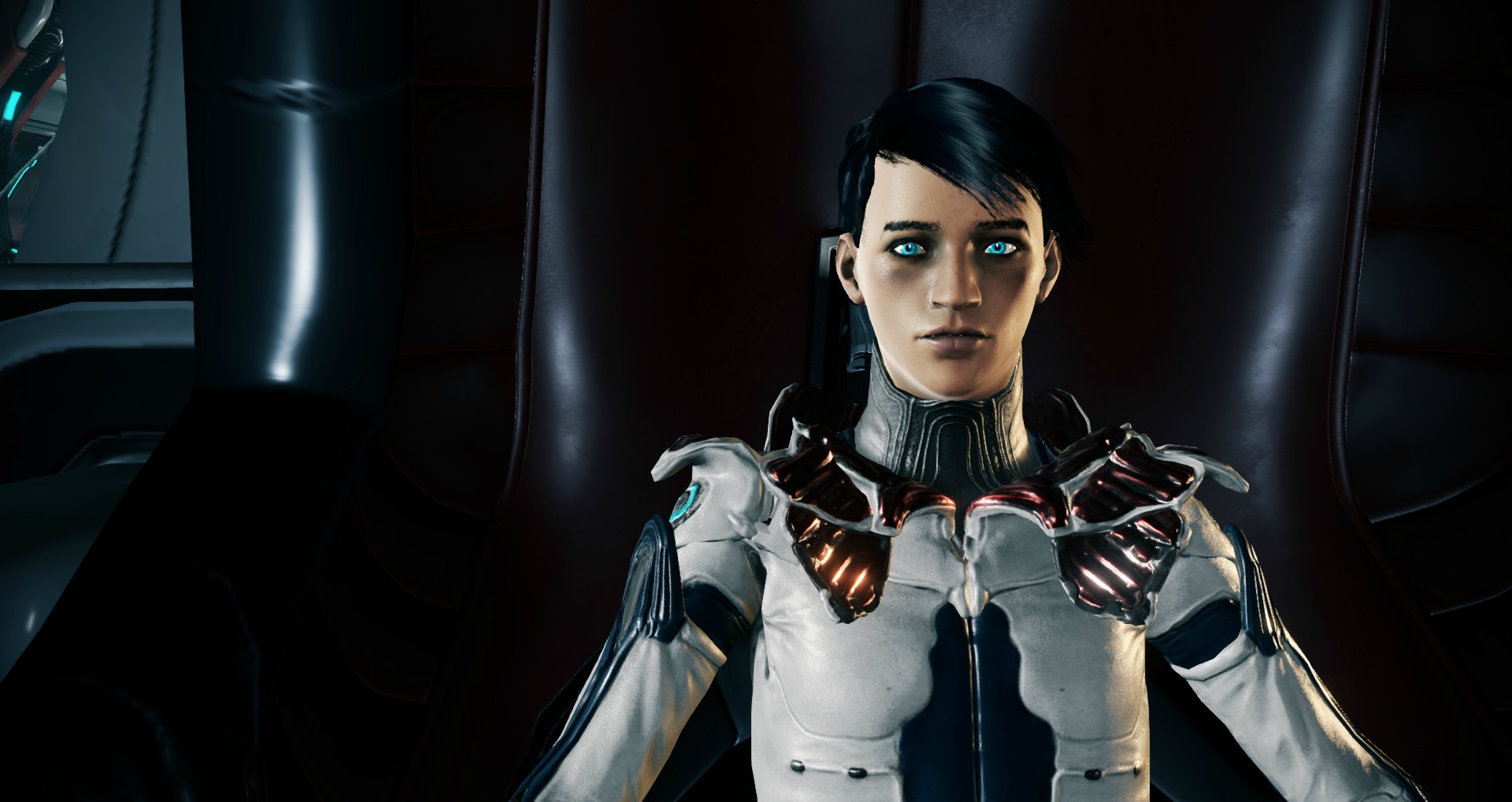