it is not maxed right now, planning on maxing it out. This is how it looks like when its maxed. 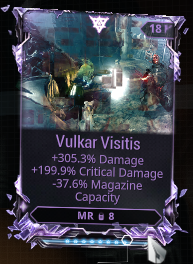