I was able to get the 50% off Honor of the Lotus for the login reward today so I was considering dropping $10 on 370 plat so I could finally get an emblem for my clan but I had a question about copyright before I decide anything. My clan, Children of Chaos is a Dark Souls inspired clan dedicated to The Fair Lady.  I was wanting to incorporate at least her silhouette into the emblem. I had two main idea's for it and was wondering if either of them would be under copyright (mainly because I'm not sure how copyright covers silhouettes and semblances of a person).

1. A side view, on the left side, starting from the bottom left, the forearms of a Warframe (Ember Prime) held out, palms up, presenting a Lotus symbol, black interior, smoky white exterior/outline (like Dark Souls Humanity) to a pale woman on the right. Just an upper torso, face mostly obscured by hair, fists gripped together in a prayer-esque fashion. Some bulbous growths with a couple spider-like legs barely coming into view (just the joints of 2 or 3 legs, up into the image and back down and out) in the bottom right corner.  The name Children of Chaos going from top to bottom (Children top middle, of under the backside of the palm in the middle, Chaos bottom middle) in a red/orange/yellow font with a lava like dapple and a black outline for eligibility.

This one is also rather busy so I don't know how well it would work for an emblem. Does that actually sound that busy compared to other emblems? I haven't looked at that many for comparison.

2.  A straight up front view of The Fair Lady (arms again, brought together in a prayer like way, fists c, only in silhouette though.  Mostly pale, cream white with a hint of red for her with a grey, rocky background; some redish-orange glows from the left and right.  Again, Humanity-esque Lotus symbol floating in front of her, slightly above the center of the image but below the arm and face. Name in generally the same place, this time with the of being below the Lotus symbol with the same font.

Picture of the general idea of the position for those who don't know the character. 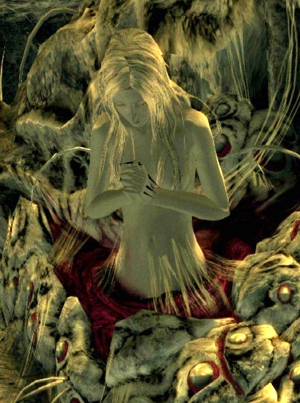 Again, I'm not imagining detail here, just colored in outlines basically.  I'm more worried out The Fair Lady being under copyright but would the Humanity effect also be copyright or would that be fine? I just want the general effect/look, not going for the same shape.

Also, of these two idea, which do you think sounds better? (I cannot offer visual examples, I have the artistic capabilities of a rock; a really artistically challenged rock)

Thanks for the assist on embeding.

Main question has been answered but I have one last one before I mark this as answered.

As the main answer indicates, images, characters and icons from other games would fall under copyright so having The Fair Lady in the emblem is out.

But, would the general ascetic of Humanity; black interior, smokey white exterior, on a Lotus Symbol be allowed or would that also fall under copyright?